The RPA Sensor Operator badge is uploaded and available.  Next up, back to the rope mine. 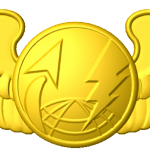 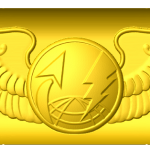 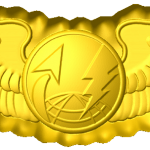 The Air Force Enlisted Aircrew badge is ready.  Next up, Sensor Operator badge.  I’ve also been working on the hat emblem for USCG officers, but while modelling miles of rope I had too many requests start piling up so I’ve set that one aside to get caught up a little.  It’s still coming though. 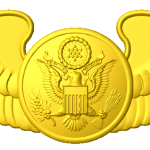 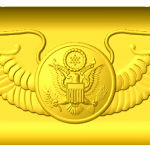 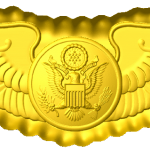 I’ve just uploaded a new model, the Aviation Boatswain’s Mate wings.  This one has an extra stl file in style a for 3d printing.  The cnc style at has very little material at the contact point between the wings and anchors.  I doubt the wings would stay attached done with a 3d printer that way, so the extra stl has more material surrounding everything to give it some strength.  This is not reflected in any of the pictures. 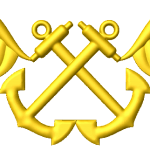 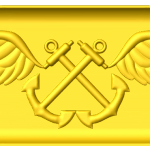 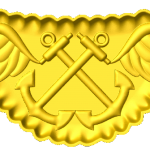 and there is no winner.  If you want to see the vectors click here to download them.

It’s contest time.  This is the top of an anchor from the Coast Guard emblem. 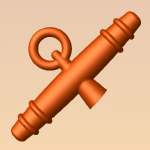 I made this with three 2 rail sweeps, all using the same profile vector.  The first person to duplicate the vectors I used to make these parts and send them to me will win their choice of any model on this site.  This contest will run until August 16, 2013 so you have 10 days to figure it out.  I will announce a winner here as soon as I have one so if you haven’t seen it announced you still have a chance.  I’ll post a screen shot of the vectors and a dxf file when the contest closes.

Don’t ask on the forums.  This is something to figure out.  The contest will end immediately without a winner if I find someone asking how to do it on a forum.

It just dawned on me that the Fallen Warrior Memorial in style a was open in the back, so I’ve re-made that stl closed.  If you have a 3d printer you might want to re-download it.

The US Coast Guard emblem is ready to go.  Next up, the Coast Guard officers emblem followed by the Aviation Boatswain’s Mate wings. 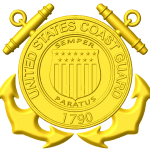 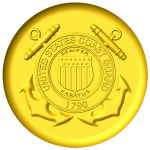 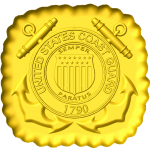 I’ve made a change to the license terms which will apply to all models already sold.  I’ve got a customer who is using these models for a 3d printer, and after making several models for him it occurred to me that my existing license didn’t allow for that.  So I’ve added 3d printing to what’s allowed under the license.  I had meant to allow that all along but just hadn’t thought about it.  Disclaimer: If you want to remain under the license in force when you bought it you have that right.  However, please don’t contact me and ask me to file suit to prevent you from 3d printing models purchased under the old license, I’m just not going to do it.

On the same topic, I’ve been told that the stl files need to be closed on the back for 3d printing.  Everything I made before the Air Force Navigator wings was hollow in all styles, everything recent is solid in style a only.

There is an issue in Aspire in that it closes the front of the model on a dished model rather than the back.  I don’t know if Vectric will or even can fix this.  There is a work around I can use but it requires flat area at the material surface surrounding the model, something I’d rather not do.  It’s easy enough to do at the time of creation, only requiring a vector to be offset a little bit, but I don’t like how it looks.  However, if you want to 3d print a model in style b or c let me know and I’ll set it up for you.

I’ve just added the USMC Combat Aircrew wings.  Next up, the US Coast Guard emblem followed by the Coast Guard officers emblem. 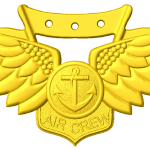 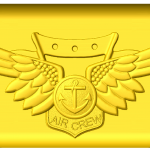 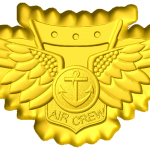