Thanks to Dave Glasco, I’ve now got pictures of Marine Corps unit insignia, so they’ll be in the rotation.  So the current schedule is the crest for the USS John C. Stennis (aircraft carrier), then the crest for the 12th Marine Regt, then an as yet undetermined Air Force unit.

Usually I base my decisions on what to model next on deployments.  For instance, the John C. Stennis is currently deployed to the Persian gulf.  I get my “deployment intelligence” by googling for news stories about deployed units.  Sometimes, I use a different standard, like in the case of the 12th Marine Regt.  I was looking at pictures of crests and just liked the looks of this one.  It’s an attractive design and doesn’t have an eagle.  I’ve made 4 different eagles in the last two weeks and will be working on the 5th one shortly.  Gettin’ a little tired of eagles.  I’m doing it to myself, though, since only one of those eagles was by request.

Anyway, here’s what I have so far.  I’ve been working on the ship.  It’s kind of a weird angle.  There will be a lot of changes to what’s already there for the ship.  Once I have all the parts made I’ll be changing heights and blending them together to make it more cohesive. 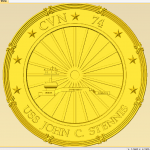 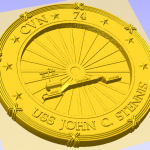