As the title says, I’m still working on the Great Seal of the United States.  I should have been done with this yesterday but too much going on to be able to concentrate on it.

My nephew rolled in to town on leave from Ft. Hood late last night and I spent the afternoon hanging out and talking with him.  I had plenty to do but I have my priorities right.

Right now the only thing left to do on the Seal is the banner.  I’m not fond of doing banners, that’s why it’s last, but this thing will be done tomorrow and I’ll be finishing up the project I stopped to work on the Seal.

I’m doing Army enlisted rank insignia, very simple stuff except for Specialist and Command Sergeant Major of the Army, both of which have Great Seals in them.  The seals that will be built in to those rank insignias will not have as much detail as the main one, but will be made from it.  Once all the Army rank is done it will go up for sale as a package at a reasonable price.  It will have all officer and enlisted ranks in the one package but individually saved and zipped, so a bunch of files.  Once I have that finished I’ll be doing Navy, Air Force, and Marine rank insignia as well. 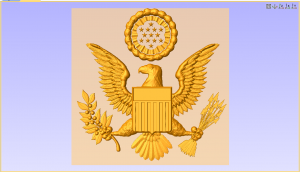