Welcome to the blog.  I decided to set this up so I can show what I’m currently working on, and possibly just run off at the mouth (or fingers) occasionally.

So currently I’m working on the Great Seal of the United States.  I originally had no intention of making one of these since both Vectorart3d.com and 3dmodelclub.com have very nice versions available, but I needed it for certain insignias and I can’t just buy it then re-sell it.  Everything I sell has to be my own creation, so since I have to make one anyway I decided to do a detailed one suitable for carving separately.

Like all the models I make, this is a large, fairly high relief model.  I do this in an effort to retain as much detail as possible when the model is shrunk to a size commonly used for carving, typically anywhere from 3 to 6 inches. 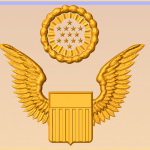 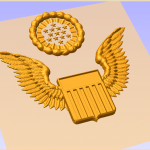 That’s a lot of feathers.  I still have plenty to do on it, but there’s only so much feather sculpting I can stand in one session.  I still need to do the legs and feet, the 13 arrows, the olive branch, the head with the banner.  That banner is going to be a problem, though, since I like to provide a flat version of the banner suitable for v-carving for those who want to carve a very small copy but don’t have micro bits that will get between the letters.  The problem is making it look right while still having a flat surface to v-carve after carving the 3d portion.

But at least it doesn’t have feathers.